The story of the formation of Island Employee Cooperative Inc., was the topic of one of several sessions on cooperation among co-ops, held at Augusta’s Viles Arboretum. 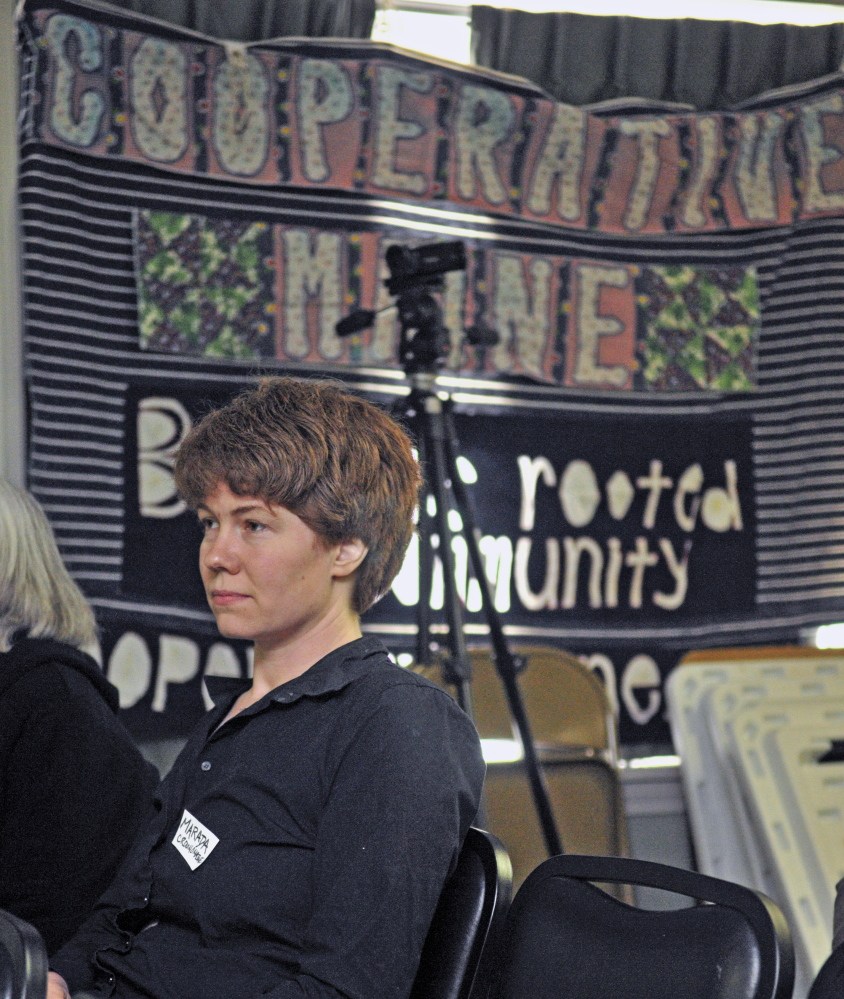 Marada Cook, of Crown O’Maine, listens to a panel discussion during a conference on business cooperatives Saturday at the Viles Arboretum in Augusta. Staff photo by Joe Phelan

AUGUSTA — Last June, 42 employees of four businesses on tiny Deer Isle in Hancock County took ownership into their own hands.

They formed Island Employee Cooperative Inc., and bought the two grocery stores, a variety/hardware store and a pharmacy that made up a business that had been owned by the Seile family for 42 years, a $5.6 million acquisition.

As the worker cooperative nears its first anniversary, profits have matched what the previous owners accomplished in their best year, but it wasn’t easy.

Initially, when Vernon Seile approached his department heads about it, the response was “Where do we sign?” said Alan White, president of the cooperative board and meat manager at Burnt Cove Market, one of the four businesses. “We had ideas of grandeur.”

The story of that conversion, which was recognized in a Denver conference earlier in the week as the largest in the nation in terms of both employees and dollars, was told Saturday morning at the Viles Arboretum in Augusta as part of the second annual Principle Six Conference.

The conference, which attracted about 75 people, was organized around “Co-operation Among Co-ops,” the sixth ofseven guiding co-op principles, which Paul Sheridan, of Cooperative Maine, likened to the Ten Commandments for co-ops.

Other sessions during the daylong networking event included cooperative governance, financing and marketing, as well as information on cooperative housing projects that create resident-owned communities.

Deanna Oliver, of Stonington, treasurer of the nine-member co-op board, had worked for the Seiles for 15 years in human resources and finance administration. Of the 65 people that had been working in the four businesses, she said, 42 signed on initially as owners in the cooperative.

“It’s a retirement plan. It’s owning your own business,” she told the audience. “It’s an opportunity. People that are baggers are now owners.” She also noted that the community has been very supportive.

There was hard work forming a board, finding a bank willing to make a loan with no down payment and gaining the Seiles’ help with some financing.

“We converted four businesses that were very well run,” White said. “The owners were very successful, and the decision of converting to a cooperative was what they wanted to do.”

“My struggle is how to get the owners to understand they own these miraculous businesses,” White said. Another challenge, he said, is regaining market share lost when the pharmacist left and built a competing pharmacy nearby. White asked members of other cooperatives to help, particularly when the cooperative’s pharmacy initiates a mail-order business.

Robert Brown, of the Cooperative Development Institute, which works with the Island Employee Cooperative, said that Maine is ripe for more conversions to cooperatives. He also distinguished a worker cooperative, in which the workers have governance, from an employee stock ownership plan, in which employees have ownership but not governance. The latter is tightly regulated.

He cited the Island Employee Cooperative Inc., and others like it. “You don’t just own the company passively. These are corporations. They are businesses. They must make profits.”

Brown is encouraging people to attend a public hearing by the Legislature’s Labor, Commerce, Research and Economic Development Committee at 9:30 a.m. Monday in room 208 of the Cross Building on L.D. 1300, “An Act to Create and Sustain Jobs Through Development of Cooperatives.”

An emailed note from Brown says “about half the bill is adding any cooperatively owned business to the list of eligible applicants for a variety of loan and grant funds run by the Department of Agriculture, Department of Economic and Community Development, and Finance Authority of Maine.”

“Maine has a tremendous number of small business owners going to retire in the next five to 10 years,” Brown said at the conference. Rather than putting the business on the open market, a conversion to an employee-owned cooperative would ensure the business is continued and sustainable, he said.

“We have a number of stores now that really want to pursue that model,” said Mark Sprackland, executive director of Independent Retailers Shared Services Cooperative, which helped write most of the business plan for the Island Employee Cooperative. “This model’s built for sustainability.”

The story of the Deer Isle conversion hit home for Marada Cook, of Hallowell, co-director of the Vassalboro-based Crown O’Maine organic cooperative.

The cooperative was the 2006 successor to the business owned by her father, the late Jim Cook, which began with the family’s Skylandia Organic Farm, in Grand Isle.

Today it has 15 employees.

“We pick up from food producers all over Maine and deliver it to retailers, restaurants, buying clubs and institutions,” Marada Cook said. “My father saw the conversion to a cooperative as a way to involve more employees and see continuity and sustain the mission to broaden distribution of local foods.”

Cook asked Scott Seile, the son of the former owners, how he felt about the transition from private family ownership to worker cooperative.

“I went from third in line (as owner) to one of 43,” he said. “The biggest challenge is not to have that active decision-making power.”